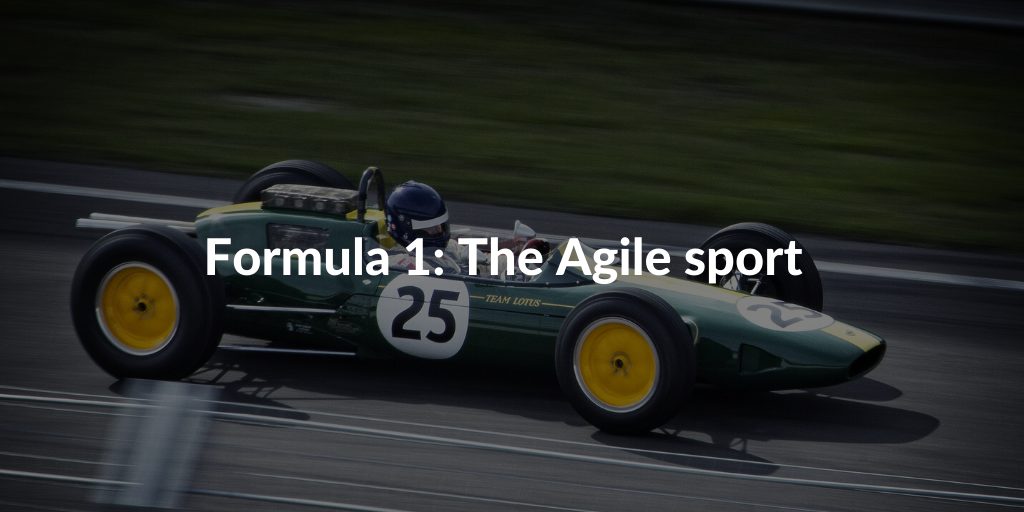 Formula 1 (F1 for short) is and has been a favourite sport of mine since I was a kid. Extreme commitment, phenomenal engineering and precision skills are just a few of the attributes necessary to compete and succeed.

I’ve been meaning to write this article for some time, having long observed some fundamental principles of Agile working in the world of F1, leading me to believe there is no better example of organizational agility in sport.

The unprecedented situation we currently find ourselves in – and furlough leave for me personally – has presented the opportunity for a brain dump!

Before I get into the detail, let me first clarify my position. A disclaimer if you like! I am not an Agile practitioner per se (i.e. Developer, Business Analyst, Project Manager), however, my current role involves the promotion of Agile Project Management guidance and supporting certifications, and I feel I have a decent understanding of the core principles of Agile working and development.

F1 for the uninitiated

Not everyone that reads this will be a Formula 1 fan, so I should start by setting the scene a little.

Formula 1 is the pinnacle of global motorsport consisting of 10 teams (constructors), each with two drivers. Often billed as the world’s most extravagant travelling circus, the competition sees teams travel the globe racing in over 20 different countries, each contributing to the sport’s two major crowns:

The Constructors (for the teams) and Drivers World Championships.

Teams spend millions every season designing and building their cars, and continually seeking performance gains over the course of the season. In most walks of life a few tenths of a second sounds quite insignificant, but in the world of motorsport – in terms of a deficit to your competitors – it’s a significant gap to bridge.

A two-tenths deficit could be the difference in qualifying five or six places down the grid, rather than on pole position.

What makes F1 so Agile?

An F1 season is a development race, driving the necessity for constant adaptation and evolution to enhance competitiveness.

During pre-season, teams develop their latest challengers through extensive design and simulation, supported by limited on-track testing. Teams arrive at the first race of the season with the fruits of their pre-season development work. But this is far from the finished product.

F1 cars are constant prototypes; throughout the season cars continually evolve through mechanical and aerodynamic modifications.

In this article I am focusing on three core Agile principles – the minimum viable product, user testing and iterative development – and how I see them in the world of F1.

The car at the first race: the Minimum Viable Product (MVP)

Unfortunately, it’s not a simple case of paying your entry fees and bringing along your glorified soapbox to the starting grid. There are detailed regulations covering all aspects of F1 car design & development, from the power unit that drives the wheels to the complex aerodynamics and suspension setups that determine a car’s fundamental performance.

Additionally, the rules effectively require you to be competitive. For a team and driver to take their place on the starting grid for each race, the rules stipulate you must post a qualifying time that is within 107% of the pole position time.

So, come qualifying for the season opener if you have a car that.…

Adheres to the sport’s technical regulations; and
Is competitive (i.e. can achieve a lap time within 107% of the pole position time)
.…then you have your minimum viable product for going F1 racing.

But that is just the start; never in the history of the sport has a team arrived at testing or the first race with the perfect car for all rounds of the ensuing championship.
Teams know that this initial concept is simply the basis for ongoing development and fine-tuning.

Modern F1 is data-driven. An incredible array of sensors blankets the modern F1 car, measuring everything from the tyre and brake temperatures, to suspension, aerodynamic and engine performance. This array of sensors enables teams to gather huge amounts of data over the course of a race weekend (well over 3 terabytes in fact!), revealing various aspects of car performance and highlighting potential areas for improvement.

But there is one more, somewhat larger ‘sensor’ that offers tremendous additional feedback on performance – the driver.

The driver is comparable to the user of the software or a product delivered by an Agile project or development team. And as any Agilist knows, user testing and feedback are vital.

It is no different in F1. Whilst the teams benefit from huge amounts of data via the sensors outlined above, it still all comes down to the driver. If all the data suggests you have the perfect car, but the driver is unable to extract the perceived performance, you have a big problem.

While sensors are great, they are no substitute for the feelings a human being experiences during mind-bending cornering speeds and travelling over 200mph a matter of centimetres above the ground.

The driver (user) and his/her feedback are therefore crucial for developing and upgrading the car, just as user feedback is critical in helping a development team design a new software package.

Just as fast and furious as the battle on track, the race to bring car updates and out-develop rivals across the course of the season is often where championships are won and lost.

There’s a romantic desire amongst us enthusiasts to see championships won purely on the skill of the drivers or the brilliance of the initial technical concept, but the reality of F1 is that success requires a third element: the speed at which the team can develop through the season and continually reinvent their car.

Engineers are constantly searching for improvements to gain those vital milliseconds and improve other key areas of performance such as stability and reliability. Seldom will a car be the same from one race to another.

With (currently) 21 races over the course of an 8-9-month season, there is a phenomenal amount of iterative development going on in the background.

Each and every lap over the course of a race weekend (three practice sessions, qualifying and the race) provides the data that teams and their engineers use to fine-tune setup and components of the car, generating a constant stream of upgrades.

Evolution and development are constant. If they are not, you simply will not succeed in F1.

The need to adapt, and fast

One of the fundamental challenges of all racing is that no two racetracks are the same. Similar, perhaps, but definitely not the same. These differences can fundamentally affect a car’s performance and lap time compared to its competitors.

Consider the Monza circuit in Italy, dominated by long straights with a limited number of corners, versus the tight, twisty & bumpy confines of the Monaco street circuit. Each requires a fundamentally different setup for the car from engine mapping to aerodynamics.

Even the nature of the track’s asphalt surface will impact on car performance, particularly how it looks after its tyres; crucial to race-long performance.

Of course, there is another major factor at play – the weather! Cars perform and behave very differently based on the track and climatic conditions (e.g. hot/cold track surface, wet/dry track, wind speed, etc).

The varying nature of the specific challenges of each race weekend throughout the season demands a level of adaptability more, arguably than any other sport. F1 teams know this and embrace it.

Formula 1 teams and their operations have evolved significantly over the years to become highly efficient and adaptive, enabling rapid development and constant evolution of their cars and performance. There is much for organizations, leaders and teams to learn from agility in F1 and I would encourage a review of the articles below for more.

Agile principles are no doubt prominent in many other sports, but I personally struggle to think of another that demonstrates Agile working principles at such scale.

I have only explored a few of the fundamental Agile principles here too. No doubt I could have gone much further with planning, sprints, backlogs, etc. Maybe for a follow-up article!

Original article published in May 2020 and reproduced with kind permission of Mark Constable, APMG International.

Mark is a Marketing Manager at APMG International and works closely with the Agile Business Consortium on the promotion of Agile guidance, training and certification for project, programme, business analysis and Scrum professionals.